One way or another, every living being on our planet depends on water. That’s why it is the first element we look for on other planets in our search of extraterrestrial life. Understandably then, nature has developed a wide range of techniques for organisms to capture water from the environment—from Californian redwoods that absorb moisture through their leaves and branches all the way to the Namibian beetle that harvests water vapor with its exoskeleton. These two examples demonstrate the ability of materials to capture atmospheric moisture. Redwoods, for instance, can cover one third of their water needs in such a way, while the beetles manage to survive under extremely arid conditions. As we already discussed in a previous article, there are plenty of vapor harvesting technologies for human consumption. Now, a group of scientists from University of Texas has improved the process of water collection by creating a material with a hydrophilic lubricant. 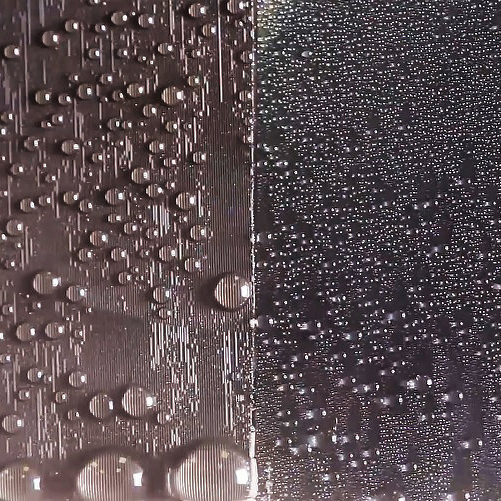 According to their publication in the magazine Science Advanced, the key lies in the creation of slippery rough surfaces (SRS) with hydrophilic properties and the ability to guide water droplets in a certain direction. These slippery and coarse areas are much more efficient than the existing technologies, which are based on slippery liquid-infused porous surfaces o (SLIPS). Before going any further, though, we should clarify some of these initials. The SLIPS technology makes use of an innovative porous material infused with a lubricant fluid. Thus, it achieves a repellant and self-cleaning surface that repels water, but also dust specks and other pollutants. Inspired by these materials, as well as the Namib beetle and pitcher plants, the SRS technology goes a step further and fosters the accumulation of larger drops, funneling them into reservoirs via lubricated microgrooves.

Therefore, the two main properties of this technological innovation are the ability to attract water droplets, as some desert beetles do, and provide an extremely slippery surface, as the one provided by pitcher plants. To that end, the researchers have leveraged the characteristics of hydroxy functional groups, which are extremely hydrophilic and are the main ingredient composing the lubricant. Additionally, the material where the lubricant is applied sports a set of nanotextures that provide increased mobility for the droplets.

According to the researchers, the new surface would be able to collect up to an estimated 120 liters per square meter daily. Besides the ability to harvest water vapor, the SRS system enjoys a slew of other applications, whether in air conditioning systems, industrial equipment, or as a surface to keep ship hulls clean by preventing the accumulation of rust and debris.

On the other hand, there are techniques that employ carbon nanotubes or laser etching to create superhydrophobic surfaces. These achieve the opposite effect, repelling liquids in an extremely efficient manner and even at times causing water droplets to bounce on impact. These new materials can combat rust, ice, and layer over solar panels to prevent water or impurities from accumulating and reducing their efficiency.

One of the most striking technologies in this field is a material developed at the University of British Columbia (UBC), which makes use of an electrical current to alternate between superhydrophobic and superhydrophilic states with the flick of a switch.