“My phone’s out of battery” is one of the most usual expressions in our hyperconnected age. While smartphone screens, processors and specifications keep improving every year, the batteries powering these devices seem to be lagging. We are stuck with the same lithium technology from a decade ago. And so, thousands of companies from all over the world are researching new alternatives for a new generation of power-hungry wearables and smartphones. There is another issue too: current technologies are highly contaminating. Thus, a substantial effort is being made to develop biodegradable batteries. And papertronics is one of the areas that promise to take recycling to a whole new level.

Cellulose-based sensors have been one of the most common approaches explored over the last few years, but they need their own power supply, which up till now required conventional batteries. However, the team lead by doctor Seokheun Choi, from the Binghamton University in New York (USA) tried an alternative line of research. Their goal was to develop cheap, flexible and biodegradable batteries, and to achieve it they investigated organic chemical compounds.

After they had printed a paper surface with an extremely thin metal layer and added polymers, they tried with lyophilized exoelectrogens. Let’s explain that a little further. Lyophilization is basically drying a material by freezing it and then heating it in a vacuum to evaporate the resulting ice crystals. And what about exoelectrogens? Well, they are microorganisms, such as bacteria, able to transfer electrons extracellularly. Just adding water or even saliva activates the battery, releasing the electrons from the exoelectrogenic bacteria, which reach the electrodes and generate electricity. According to the researchers, two minutes after adding liquid to the prototype, enough electricity was generated to power a LED light and a calculator.

The batteries developed by Choi’s team are fully biodegradable: once the device has run out of electricity, the bacteria start feeding on the paper and break it into eco-friendly compounds.

This is a one-use technology with a two-month shelf life, but it could have a wide range of applications in emergencies, as well as powering alert systems. In fact, one of the main advantages of this technological innovation is that the bacteria, one of the oldest organisms in our planet, can survive under the most extreme conditions and harsh environments. 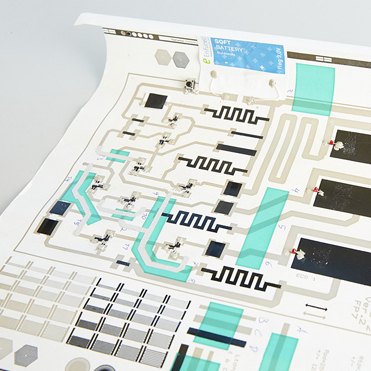 Batteries, however, are not the only the only field of electronics ripe for paper disruption. This year, Portuguese researchers Elvira Fortunato and Rodrigo Martins published an article in the scientific journal ACS where they explored the potential of paper-made transistors. Just like with batteries, their goal was to develop a biodegradable technology that could do away with silicon.

The researchers have managed to develop semiconductors and electrical insulators based on a cellulose biopolymer. In order to achieve that, they printed the paper surface with a special ink infused with nanoparticles of gallium, indium or zinc. Finally, the paper is coated with a nano-thin layer of aluminum that works as a conductor and helps dissipate heat.

This innovative technology could also enable the printing of photovoltaic cells, sensors, and even RFID circuits. In short, these transistors will not be replacing your computer chipset any time soon, but they could have interesting applications, for example, for tracking products in the food industry.