If population data foreseeing 10 billion inhabitants on planet Earth by 2050 are accurate, we must reconsider the management of the energy we consume and our relationship with the world´s resources in different terms… otherwise, “Houston, we have a problem”.

In fact, this way of thinking has led to the Regen Village project, an innovative district on the outskirts of Amsterdam capable of self-generating its energy requirements which, according to those in charge, will feature 25 fully-operational households as of 2017. This revolutionary approach may become an unprecedented environmentally-friendly neighbourhood model.
Regen Village will be located in the Dutch town of Almere, 20 minutes away from Amsterdam by train. In this village, every neighbour will produce its own energy, grow its own food, manage its own waste and recycle its own water. How? Embracing the breakthroughs in renewable energies, geothermics, aeroponics and biomass treatment.

“Regen Village will produce its own energy through wind power, geothermics or solar power”

As of 2017 the first batch of 25 households will be available, of a total amount of 100 which are planned to become part of this self-sufficient community, aiming at gradually implementing the very same model into other European countries, such as Sweden, Denmark, Norway, Germany or Belgium. This village would not only be an innovative urban management model, giving the planet a little break, but would also be of great help to household economies and even to local government budgetary provisions.

The concept of Regen Village draws from research made at the Stanford University promoted by entrepreneur James Ehrlich, who decided to involve Danish architectural studio Effekt in the project to make it possible. But, how well will this neighbourhood perform and what would such a close and detailed relationship among all scheduled energy processes be like? 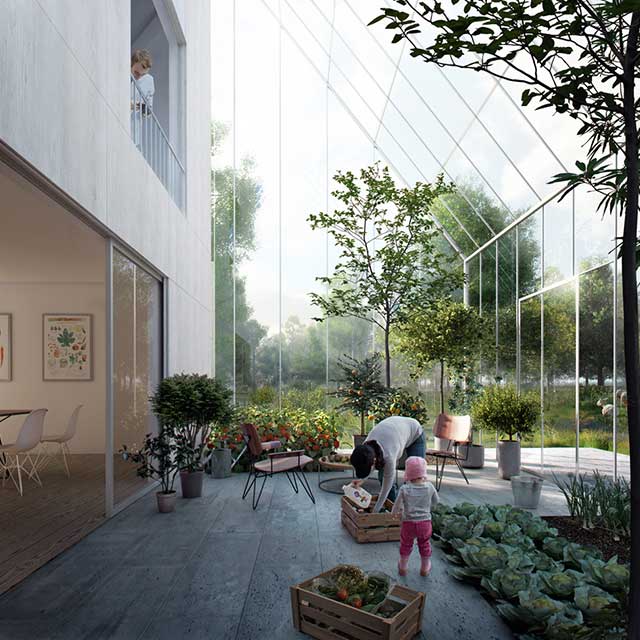 According to the plan, Regen Village community will produce its own energy through biomass techniques, wind power, geothermics or solar power. A smart grid design will allow, for instance, to send this energy to a garage in order to charge shared electric vehicles. Admittedly, this neighbourhood´s self-sufficiency foundation will be based on citizen collaboration.

Composting will play a key role in the structure of the whole project. A great amount of residual by-product will be utilized to feed the livestock, whose manure will, in turn, feed a type of fly essential in the composition of the menu of certain fish whose droppings are used to fertilize fruits and vegetables grown in personal consumption orchards. A perfect example of a closed and completely energy efficient cycle. Meanwhile, non-compostable waste will be converted into energy inside a biogas plant.

Foodstuff growing will be based on a cutting-edge vertical orchard system, seasonal gardens and organic farming comprising aeroponics, aquaponics or permaculture, while a storage system will make use of rainwater or graywater for irrigation.
We don´t know whether Regen Village will display tulips and windmills like many of their fellow Dutch neighbours do, but it is obvious that sustainable energy yield will be the hallmark of this hopeful district.