A young Belgian engineer gazes pensively over a bridge. Below, the water flows downstream as usual, but he can’t help noticing a peculiar phenomenon: the water crashes against the bridge’s pillars and small whirlpools form as a way of dissipating the kinetic energy. His head starts spinning too—could there be an easy way of harnessing that movement to generate electricity? The young man thinking about the matter is Geert Slachmuylders, and he will soon share his idea with fellow entrepreneur Jasper Verreydt, who will embrace it enthusiastically. Both start working on a project, first developing a theoretical model to prove the feasibility of a microturbine based on this principle. It works. Back to the present, in 2018, and after the subsequent capital funding rounds from investors and the Belgian government, they launch one of their first operating plants in Chile. For this project, they have leveraged the infrastructure of an old water windmill to provide renewable energy to a Mapuche indigenous community in the region of Doñihue.

The system consists of a concrete structure that collects water from the river. The water flows down a spiral, running through a turbine, the only moving part in this Lilliputian power plant. Simple but efficient. The smallest hydro turbine has a 15-20 KW output, enough to provide electricity for four or five families. However, it is a highly scalable technology that can reach a maximum 10MW theoretical output, which could even power a small city. 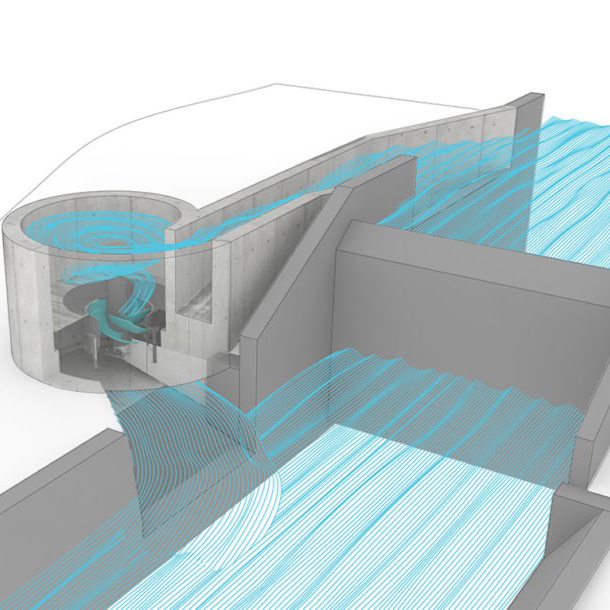 Hydroelectricity is one of the longest established power-generation technologies. Nevertheless, it does have its own disadvantages. Firstly, building a dam is a complex and costly process. Secondly, storing large amounts of water affects the surrounding terrain, while also preventing some fish species from swimming upstream. By contrast, the solution developed by this startup is extremely cheap—the founders claim that the investment can be recovered within four to six years— while also allowing fish to swim through unharmed. As a bonus, it can also filter debris from the current by using a self-cleaning screen. Finally, the lifespan of the concrete basin exceeds twenty years.

This innovative technology shows great potential in mountainous regions and developing countries, as well as in isolated communities, as it can work in rivers with low water flow and just a one-meter drop height. The structure can be placed on the riverbank or within the current itself.

In the future, just like with wind turbines, solar panels, and fuel cells, these microturbines could help to deliver decentralized energy, also called distributed generation.