Fossil fuels are the cause and solution for many of the challenges posed by human development. The 1st industrial revolution, in the 19th century, wouldn’t have existed without coal and the 2nd one, in the early 20th century, wouldn’t have evolved without oil. However, these power sources have their own downside—from the soot and smog that polluted the Dickensian London to global warming and the plastic island and oil spills in the seas. While countries and companies work on the development of alternative power sources, in the here and now we need a pragmatic approach to the most immediate damages. Along those lines, oil spills are still one of the most severe environmental disasters as proved by some of the accidents over the last few years. Currently, there are several methods to combat them, such as oil booms, chemical dispensers and sorbents like sawdust. However, nature may provide a different way to tackle the issue—two invasive aquatic ferns, Salvinia molesta and Pistia Stratiotes.

These species originally from South America, which can double their size in a couple of days, show some interesting qualities that have that have inspired science researchers. Specifically, they are termed “superhygrophobic”, which means they repel water in a highly efficient manner. This property can be explained by the presence of trichomes, a dense network that covers their leaves at a nanoscopic level, as well as a layer of wax microcrystals that cover them. A few years ago, drawing from biomimicry, a few researchers from the IMT (Institute of Microstructure Technology) developed a new m3D-printed material that they named as nanofur.  This was based on applying a hot steel plate on a polymer. Once the polymer layer is melted, the plate is retracted pulling out millions of nanowires in the process, a bit like those cheese strings in a pizza. The material can repel water and absorb oil just like the Salvinia weeds. The original fern absorption qualities, however, had not been put properly to test yet. Claudia Zeiger, a researcher from the Karlsruhe Institute of Technology (KIT), wanted to study the absorption rates of the Salvinia and discovered they were substantially higher than expected, as shown on this video. In fact, the absorption process takes place in less than thirty seconds. 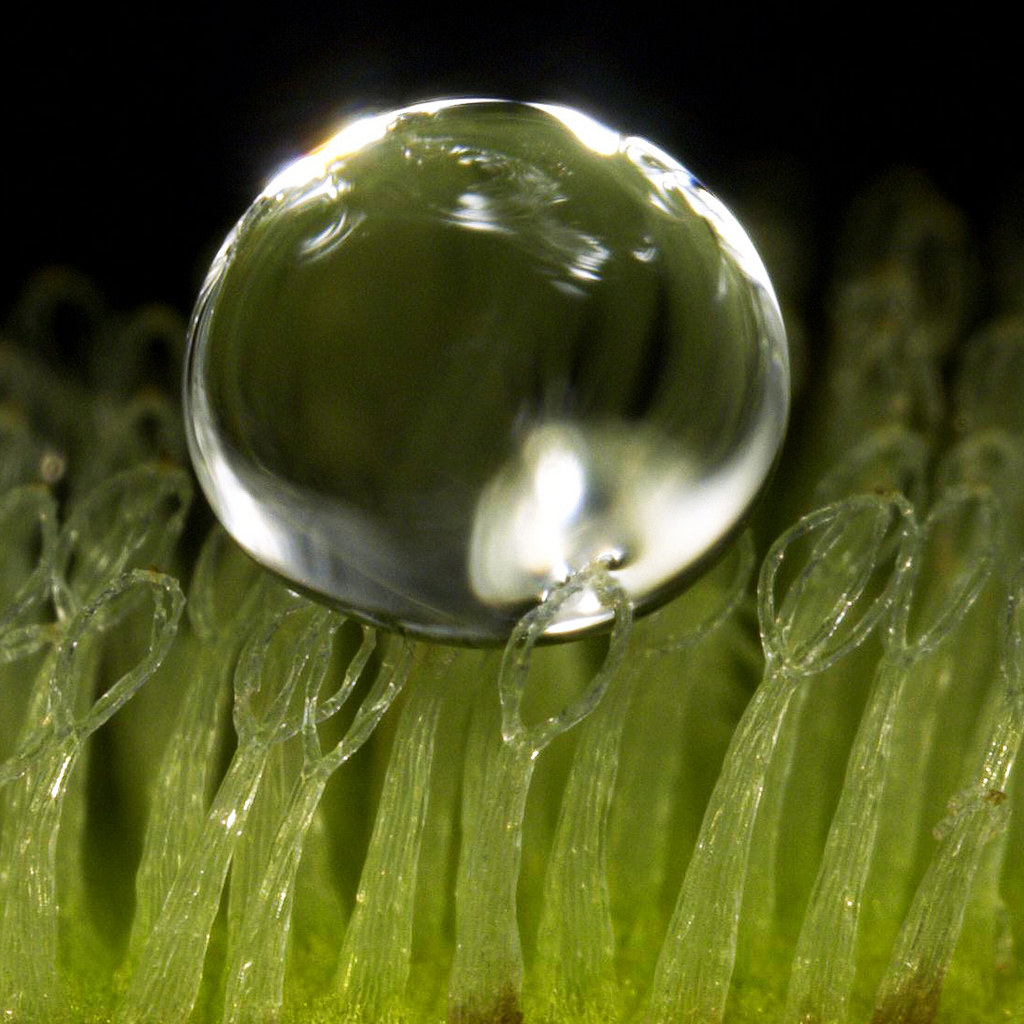 Following the analysis of several ferns, the results showed that the efficiency of the Salvinia stems from the “egg beater” shape of its hairs, which can trap oil molecules. The findings have been replicated in the lab by using carbon nanotubes. Zeiger believes that these weeds could also be used directly in oil spills, which would allow to kill two birds with one stone—on the one hand, it would combat weed infestations, while on the other oil spills could be cleaned up in an environmentally friendly way. Now the main challenges faced by the researchers are the scaling up of the technology out of the lab and the retrieval and availability of the weeds in case of an oil spill.

Another technology used recently to combat oil spills is based on a polymer developed with cooking oil and Sulphur. Both are waste products that could be recycled for environmental purposes. Just like the above nanofur, this is another hydrophobic material. Developed at the Flinders University in Australia, these sponges can be spread over the water or packed into a filter and pumping the oil-water mixture through it.