Air pollution is one of the greatest ailments of modern cities. And vehicles with combustion engines are some of the main culprits. In some of the most extreme cases, traffic and parking areas have to be limited to improve air quality. However, the problem could be addressed if vehicles absorbed the carbon dioxide they released. Such is the reasoning behind the tires developed by Goodyear, which were presented at the latest Geneva Motor Show.

We recently spoke about bioinks and the rise of material with organic elements that allow the integration of multiple physical properties. With these technologies, oil-degrading bacteria can be used to combat oil spills and fungi spores can foster the precipitation of calcite in concrete structures when exposed to moisture to seal cracks.. Inspired by a similar concept, the new Oxygene tires incorporate a layer of moss on their sides. Besides transforming the vehicle into a kind of garden on wheels, the goal of this technology is for the moss to absorb carbon dioxide in the atmosphere and release oxygen instead. The moss thrives on humidity or, when it rains, on water from the road.

In their presentation, Goodyear stated that in a city like Paris, with around 2.5 million vehicles, the new technology would be able to release three thousand tons of oxygen and absorb four thousand tons of carbon dioxide every year. This, however, isn’t the only environmental advantage of the tires, as the prototype developed by the manufacturer uses a 3D printed mesh with rubber powder from recycled tires. And, as the mesh doesn’t require pressurized air to function, flat tires will be a thing of the past. The outer pattern has also been designed to improve wet grip by helping to absorb water from the tread. But the advantages don’t end there. 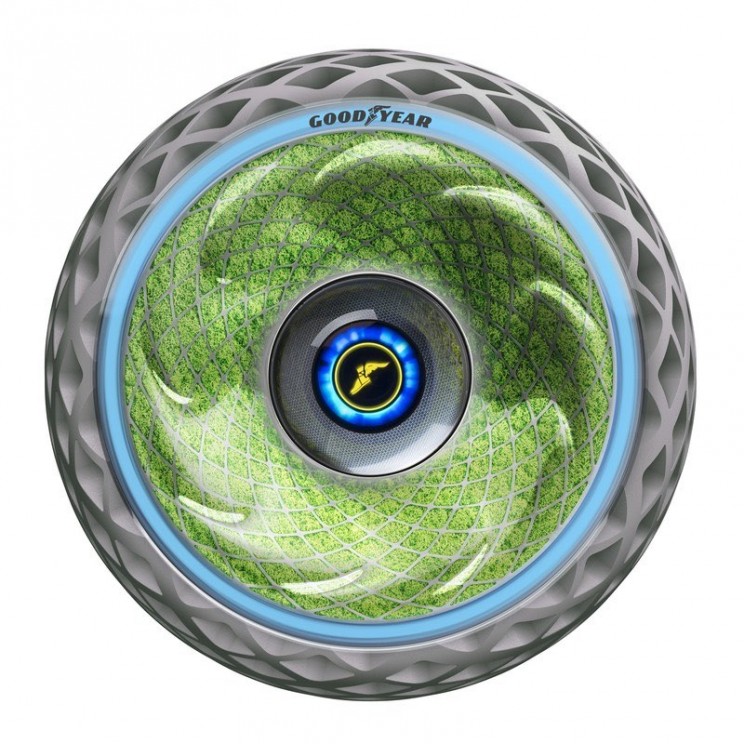 The integrated moss does not only release oxygen and absorb carbon dioxide, but it also generates its own electricity through photosynthesis. This energy powers electronic devices embedded in the tire, including an computer processing unit, sensors and a customizable light strip on the tire’s sidewall. This strip changes color to warn other cars of maneuvers being performed by the driver such us passing, changing lanes, or breaking.

Finally, these tires are connected to the Internet of Things (IoT) with a light communication system able to communicate with other vehicles (V2V) and nearby infrastructures (V2I).

Although the tires are a technically viable solution, they are still a prototype in its early stages. They do, however, usher in a new era where environmental issues take precedence and tire yards are a distant memory. Just in the USA, 300 million tires are disposed of every year, which are very challenging to recycle. By betting on this technology, Goodyear joins the trend of the zero-waste circular economy where resource-consumption is greatly optimized. Indeed, these tires will make a great match for the increasingly efficient and affordable electric vehicles that are beginning to populate the road.