The tremendous temperatures of nuclear fusion reactors or the conquest of outer space are fields in which the development of new materials has become a critical requirement. And the answer likely lies in nanotechnology, as demonstrated by the innovative material recently presented by a consortium formed by MIT and Caltech(the California Institute of Technology) in the USA and ETH Zürich in Switzerland.

The main property of this new material is its high strength combined with unprecedented lightness. Specifically, the researchers indicate that it will be much stronger than Kevlar or steel, which would allow it to be used in protective clothing or the coating of objects and structures.

To achieve this, they used nanocarbon patterns to strengthen the material, a technique known as nanoarchitecture. Subsequently, they took it to the lab to subject it to a relentless microparticle bombing at the speed of sound. At the end of the article, you can see the sequence of a microparticle impacting the surface.

The structure of the material was created using a two-photon lithography technique. It involves using a laser beam to solidify a photosensitive resin, giving it the desired configuration. The goal is to replicate a method described in this article on 3D printing with light, albeit at a nanoscale.

The result is a kind of microscopic mesh with a structure known as a tetracaidecahedron, a fourteen-sided polyhedron. This type of geometry had previously been used in energy-mitigating foams.

By taking it down to the nanoscale and giving it this shape, a brittle material like carbon becomes flexible. And, as the Jewish Talmud points out, it is preferable to be flexible like a reed rather than rigid like a cedar tree, especially if you suffer an impact at a thousand meters per second.

Once this nanoarchitecture was developed, the Caltech laboratory tested its resistance to impacts. The "cannon" used was an ultrafast laser projected onto a sheet of glass with a thin gold layer, coated in turn with silicon oxide microparticles.

When the laser penetrates the foil, a plasma propels the silicon particles at supersonic speed—a bit like when plonking on a sofa with a glass of coffee on it.

The researchers recorded the impacts with a high-speed camera, and the result can be seen in the adjacent GIF. The nanoarchitecture proved to resist the impacts by deforming and compacting in the affected area. And, the denser the material, the better it resisted supersonic particles. 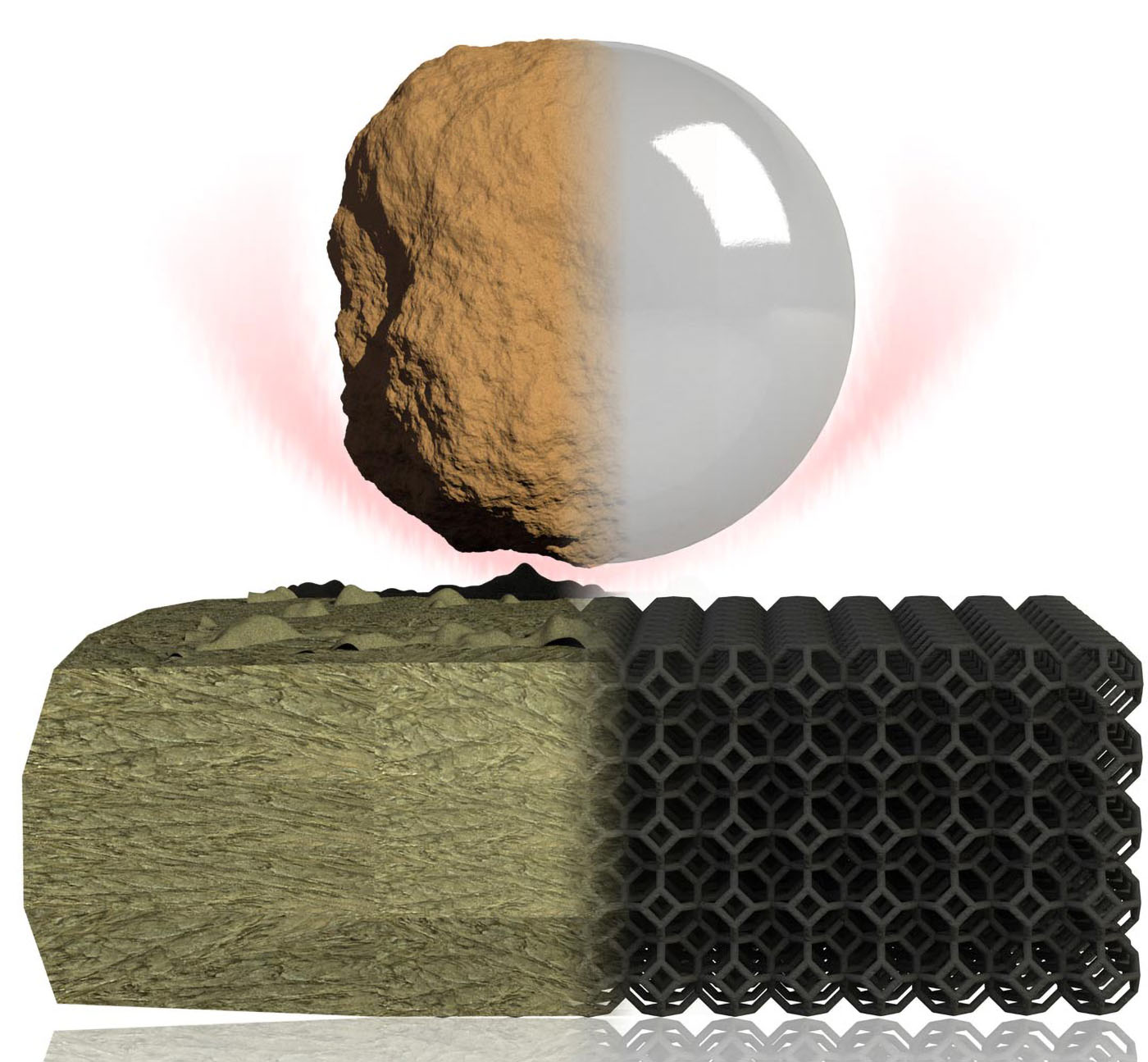 A model based on meteorite impacts

The tests have been carried out with microparticles shot against a sample thinner than human hair. Still, the physical principles are the same as those applied in modeling large-scale meteorite impacts.

The experiment used the Buckingham II theorem, a dimensional analysis framework to characterize planetary impacts. This analysis combines physical characteristics such as meteorite velocity and planetary surface strength to calculate the "cratering efficiency," i.e., the probability that the meteorite will penetrate the surface.

This model allowed them to predict the effect of impacts with high accuracy. Moreover, according to the researchers, this type of analysis framework is extensible to other nanomaterials when testing their strength and resilience.