Pollution in the air that we breathe, mostly over European and Asian urban areas, is one of the main issues regarding the environment and our health. According to the WHO, 9 out of 10 individuals living inside the EU are exposed to excessive levels of pollution.

Over the next few days, in fact, the city of Madrid (Spain) is considering what kind of protocol should be implemented to improve air quality, since its nitrogen dioxide levels have reached almost 200 mg/m³. However, Spain is not the country worst off in the environmental pollution conversation, particularly when compared with cities such as Abu Dhabi, Amman or Beijing, whose skyscraper and passers-by dust-shrouded depiction has become worryingly familiar to us.

When Dutch designer Daan Roosegaarde visited Beijing he beheld in perplexion the skyline of the city vaguely through a dirty and greyish smog veil, so he decided to do something about it. And voilà… the artist introduced a clever and revolutionary idea that could tackle the problem of city contamination: a 7-meter “vacuum cleaner” capable of absorbing polluted air, cleaning it inside the device, and releasing it back again free of pollutants. The design is inspired by Chinese pagodas, turning it into some kind of clean air temple with an atmospheric upper intake, filtering capabilities and vents to allow fresh air back into the environment. 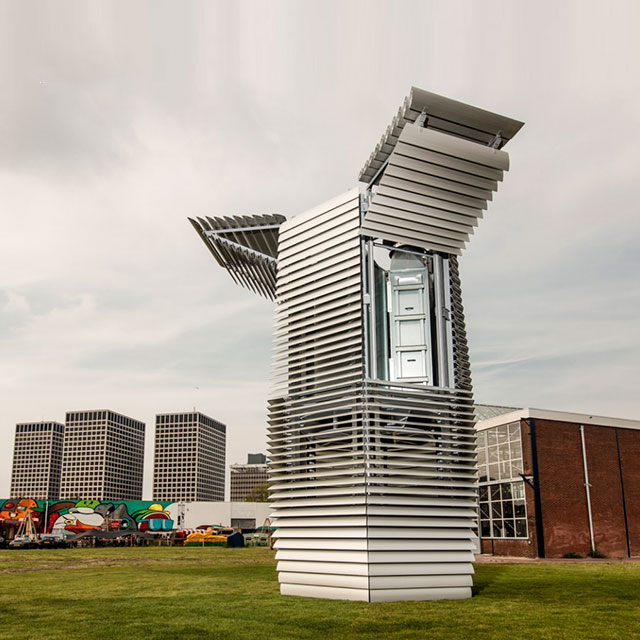 Incoming data from this pioneering solution are encouraging, as it seems that areas wherein the giant vacuum is up and running show an up to 75% increase in clean air volume than those zones where its use is not implemented. Besides, all the process requires just 1400 watts, more or less the same amount of energy consumed by an electric boiler, and it´s generated by wind power. For now, the tower is on display in Beijing, and will be touring some of the most relevant cities in China.

Just a few months ago, Chinese artist Nut Brother donned a vacuum cleaner and committed himself to hit the streets of Beijing turning smog into bricks, thus denouncing the critical situation some cities such as his own are going through. Daan Roosegaarde´s giant vacuum addresses the subject at a different scale…could this be the ultimate fix?