Green power continues its unstoppable advance, but only a few homes have an electric battery to store the electricity generated throughout the day. Fortunately, the answer to this shortage is much closer than we imagine. When the number of electric vehicles forecast by the Bloomberg-NEF consulting firm reaches 1.4 billion in 2040, their batteries will be the world's largest energy store.

Leveraging the idle capacity of these batteries when the vehicles are not in use to optimize the electrical system and allow the integration of more renewable energy is the primary goal of V2G technology. This is the acronym for Vehicle-to-Grid and refers to the technology that enables two-way communication between a vehicle and the electrical system.

This communication enables the battery to consume energy from the grid or supply it to the grid depending on different circumstances, such as the level of demand, electricity price, or the technical conditions of the grid at any given time.

Thus, for example, a fleet of V2G vehicles can help the system to cover electricity demand peaks without resorting to fossil fuel plants, be an emergency solution in the event of sudden blackouts, consume electricity when the price of energy is cheaper, or provide adjustment services to the system to maintain its necessary technical balance, among other applications. 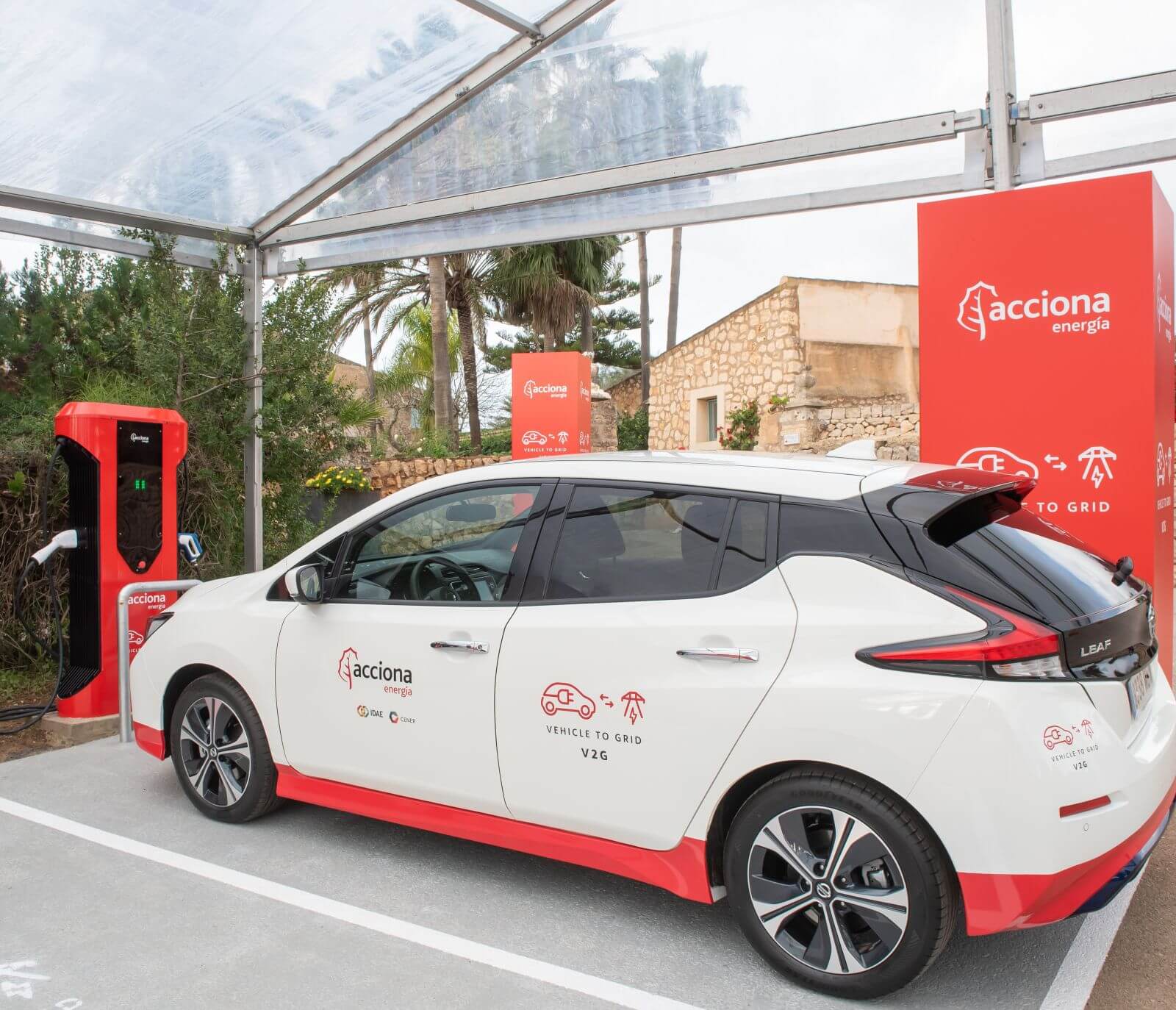 In addition, some of these services are paid for, so a V2G vehicle can generate income for the owner while parked in their garage.

The deployment of the electric vehicle (EV) is bringing about the convergence of two worlds that have lived side by side for more than a century: the transport sector and the electricity sector. The worldwide proliferation of electric cars, actual batteries on wheels, is leading to collaboration, if not convergence, between automakers and electric utilities, which are doomed to understand each other in this new scenario.

Consumers, who are becoming less passive and more protagonists, demand clean, available, and affordable energy. Hence the momentum being experienced by technologies such as V2G, which turn the EV not only into a means of transport but also into a device that provides services to the electricity system within the framework of smart cities.

V2G is the more complex and sophisticated version of other variants of EV used as an energy store, such as V2H (Vehicle-to-Home), V2B (Vehicle to Building), or the generic V2X (where X refers to any device or system that the EV can power).

The main elements that make up a V2G system are:

For the power grid

For society and the planet 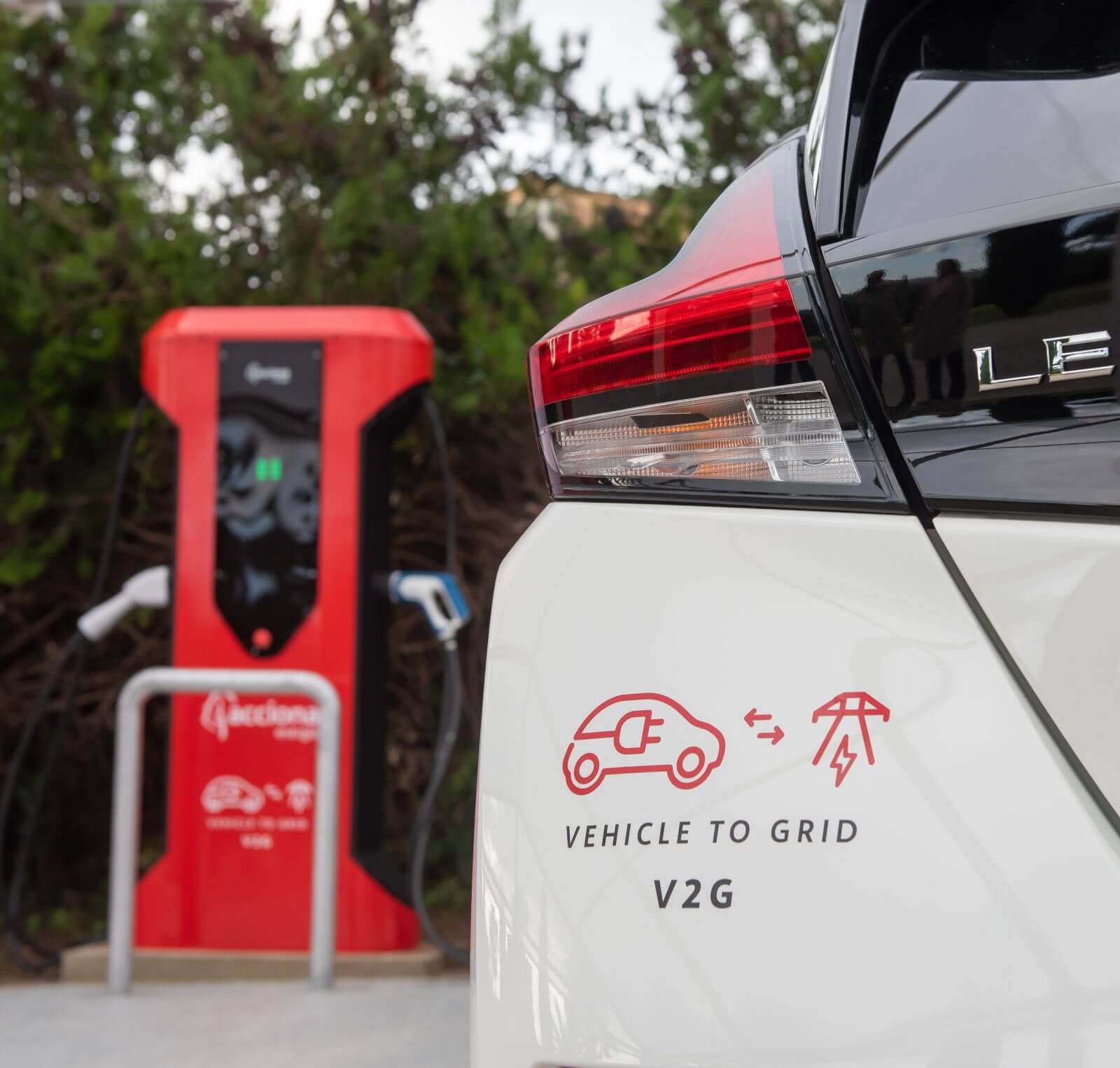 V2G Balearic Islands: a pilot test of the future

V2G technology is still at an early stage of development. The appropriate equipment and devices exist, but there is still much to be done in the technological, regulatory, and economic fields so that it can reach mass adoption and become a competitive commercial alternative.

In any case, there is little doubt that, in the not-so-distant future, our lives will revolve around numerous electrical devices and equipment interconnected in a smart grid powered by 100% renewable energy.

Thus, initiatives that point towards this future are starting to be implemented. One of the pioneering examples is the Balearic Islands V2G project. Developed by ACCIONA Energía, it will be the largest to date in Spain to test V2G technology in real situations.

The project includes installing sixteen V2G charging points in eight Balearic companies from different sectors, to which it will provide eight Nissan Leaf vehicles for 24 months. With this pilot experience, the company will monitor the main variables of V2G operation and validate applications such as complementary services to the network, smoothing of peak demand, and others associated with this technology. You can see the project in this video:

The results of the V2G Balearic Islands project, which will run until 2024, will enable designing more economical and efficient charging solutions for electric vehicles. The energy supplied for recharging electric vehicles will be 100% renewable. And, above all, sustainable.