The wrap with which solar power is presented is increasingly unusual whilst, at the same time, ever more familiar. As a matter of fact, we were recently talking about photovoltaic roofs under the appearance of traditional tiles, a truly sustainable trompe-l´oeil integrated into our conventional architecture. Well, now is the turn of ground- level improvements, since the world´s first solar road is already fully operational in France.

The wrap with which solar power is presenThis is not the first attempt at turning photovoltaic panels into tarmac, since the people of the Dutch city of Krommenie have been enjoying a bike lane capable of generating solar power for nearly two years. However, the one in France is the first road section which, in addition to generating energy, is open to motor vehicle transit. 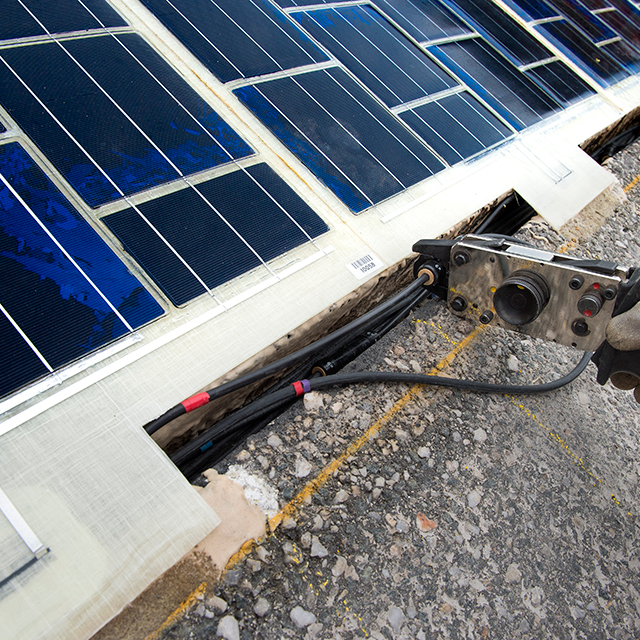 The world´s first solar road is located in France

The road, leading to a little village in Normandie called Tourouvre-au-Perche, covers so far a distance of 1 kilometre and is composed of 2,800 m² of solar modules. These panels are covered with a resin made of thin layers of silicon capable of withstanding the weight of more than 2,000 vehicles per day while ensuring tyre grip without compromising energy efficiency.

A kilometre is not a long distance, true. But the idea is for this road to serve as a pilot test while supplying energy for the village’s street lighting for 2 years. After this period and according to the outcome, the viability of extending the project to up to 1,000 km inside the French road layout will be considered.

Supporters and detractors, are all of them right

Five years of research and a budget of 5 million euros are the figures regarding the first solar road built in France. An engineering achievement which would allow to take advantage of solar power to produce energy for local consumption, such as streetlight or traffic light requirements, without invading landscape or agricultural areas, or to supply lay-bys without connection to the electric grid. Besides, since solar pavement is placed over the tarmac in already built roads, it wouldn’t require further infrastructure to be made.

According to the official French Environmental Agency (ADEME), with just 15 m² of this tarmac several traffic lights would be supplied with energy, and a kilometre could supply a town with a population of 5,000.

Even though the sponsoring companies and French authorities endorsing the project affirm that it will be profitable as of 2020, when the price of the kilowatt generated by a solar road could be similar to that produced in a conventional photovoltaic plant, the fact of the matter is that this initiative deals with many cons as well.

According to initial estimations, the price per kilowatt produced by solar tarmac is EUR 17 as opposed to EUR 1.3 when generated by a roof installation, so, at hand, the cost of its implementation is exorbitant considering the amount of energy it generates. The promoters base their estimates on the idea that traffic would only cover the panels between 10 and 20% of the time, so the surface would be exposed to sunlight for the most part of the day, though many experts suggest that horizontal installation, as in the case of solar paving, is less efficient than slanted panels and, therefore, less advisable.

Either way, time will have the final say and ascertain who’s right on the matter, and whether solar roads could really become the tarmac of the future.