In 2017, Christie’s auctioned the most expensive painting in history. It was “Salvatore Mundi,” attributed to Leonardo da Vinci, and fetched four hundred and fifty million dollars. The term “attributed” is the key here: the controversy of its authorship has accompanied the work since its identification ten years before that auction. There is even a documentary about its history. The fact is that scandals over forgeries or inaccurate attributions of works of art are the order of the day in the art circuits. However, artificial intelligence may make it easier for the experts in charge of stamping them with the seal of authenticity.

The new tool is a development of Case Western Reserve University in the U.S., which surprised the researchers themselves with its accuracy. The tests compared the work of four artists and identified their authorship with a 95% accuracy. The creators of this artificial intelligence technology point out that the system can identify a kind of “fingerprint” of the artist that goes unnoticed by the human eye. Another analogy would be that of a person’s unique handwriting transferred to the strokes of a paintbrush. But how does it work?

One of the keys lies in the fact that neural networks do not limit themselves to analyzing the shape of the brushstrokes. The research, published in the journal Heritage Science, explains that the starting point is the 3D scanning of the painting. The device used to achieve this is known as a chromatic confocal profilometer. This machine uses light and color to detect the subtlest textures. 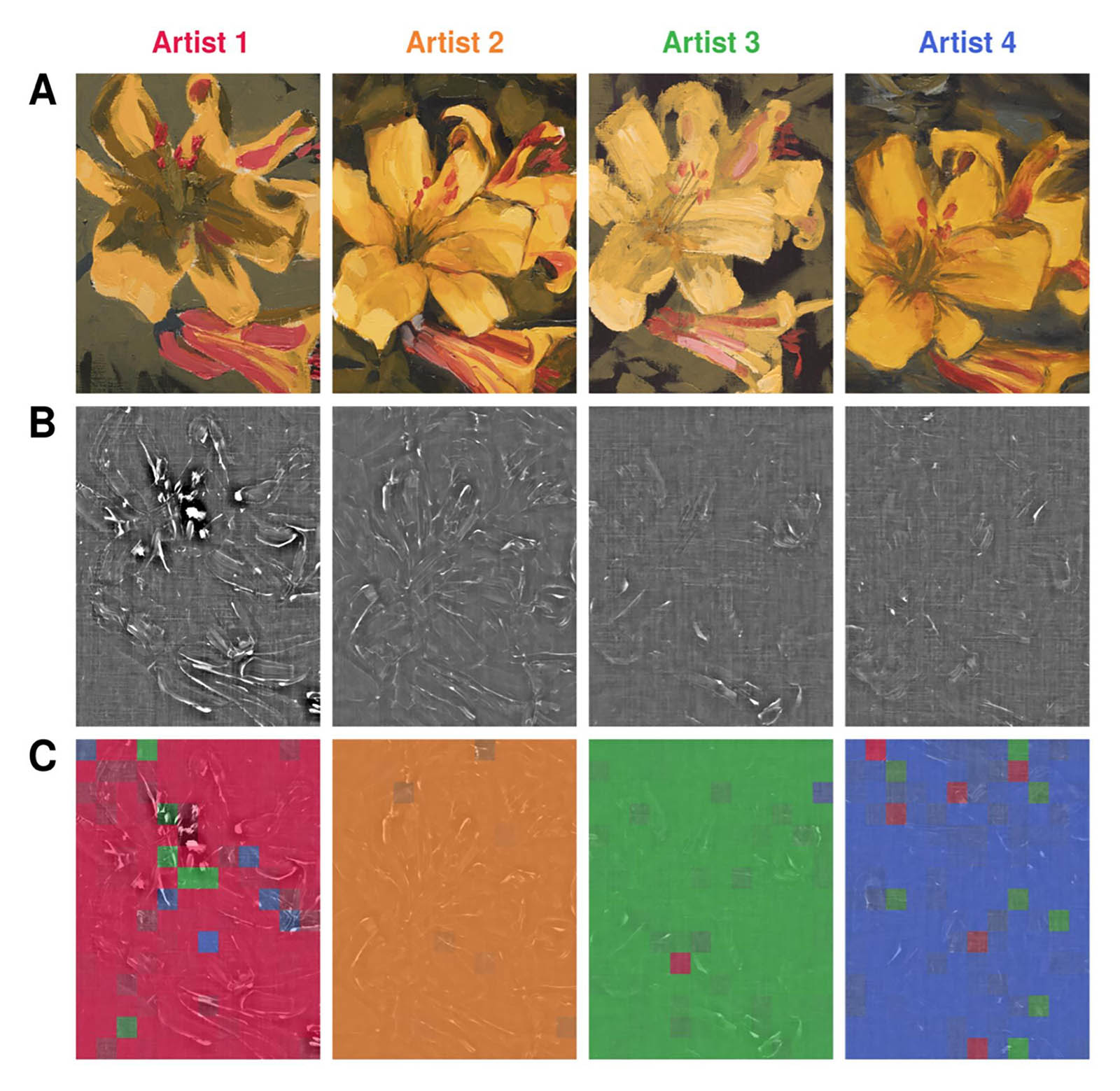 Thus, once this 3D map is obtained, the artificial intelligence system compares the different reliefs of each work, including the depressions and elevations of the oil used. In addition, the examination looks for almost microscopic patterns, with roughly the diameter of a single paintbrush bristle.

The researchers point out that, unlike previous AI systems, neither the whole work nor the subject matter is recognized. What is studied are small areas ranging from millimeters to centimeters in extent. Once the software has been trained, a small area of a painting is enough to identify the author.

In addition to helping to recognize forgeries or establishing authors, this innovative technology makes it possible to check which parts of the same work correspond to an author. This is a problem that arises primarily in classical works such as those of Velázquez and other painters who relied on the help of collaborators to finish the most tedious parts of a painting. Sometimes this practice blurs the authorship of the work.

Thus, some paintings attributed to an artist have later come to be considered works by his school or his assistants. And vice versa: recently, a painting attributed to the school of Van Dyck turned out to be a work by the renowned Dutch painter. In fact, in “Salvatore Mundi” itself, part of the debate revolves around the possibility that a large part of the painting is the work of Bernardo Luini, Da Vinci’s assistant.

Artificial intelligence in the art world is not limited to pictorial analysis but is beginning to show certain skills in the creative space too. In 2018 Christie’s auctioned the first painting created by artificial intelligence. The “Portrait of Edmond De Belamy” was sold for more than four hundred thousand dollars, although the sum did not go to the AI but to a French art collective that goes by the name of Obvious.

One of the artists delving into the possibilities of AI applied to art is Refik Anadol. In his case, instead of creating simple paintings, the artist has opted for spectacular art installations. He uses big data and machine learning algorithms to create animations that visualize complex databases. In this way, each point that appears and moves corresponds to a data entry. Anadol tries to answer a question: can data become a pigment?

Moreover, in line with this type of creation, the so-called “generative art” has begun to proliferate in recent years. In the heat of NFTs and blockchain technology, numerous artists use algorithms to create series of digital works. Who is the author? The AI programmer? The artist who creates the settings? Not even Isaac Asimov, who coined the famous laws of robotics, could foresee that one day technology would also question the concept of artistic authorship.