In 1950, Isaac Asimov published his science-fiction masterpiece “I, Robot”, which was adapted to the big screen in 2004 under the same title. We were then able to see how some android couriers delivered packages with full respect of timeliness and, what´s always much appreciated, great friendliness. This is a perfect example of the many times literary creativity has actually foreseen what is to come. Once again, this has happened: the first trials with robot couriers are already a reality.

A company by the name of Starship Technologies, a start-up created by some of the founder members of Skype, has already put into operation the first home meal delivery wheeled robots in some European cities such as Düsseldorf or Bern.

“Could a six-wheeled robot be the courier of the future?” 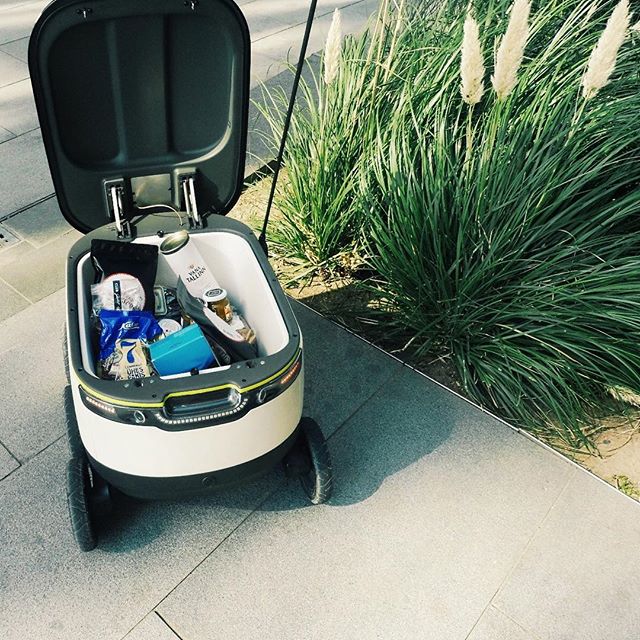 But how do these artificial intelligence courier machines work? This six-wheeled robot, very similar to a vacuum cleaner in its looks, is capable of moving autonomously thanks to an electric engine and features a battery that runs for up to 6 hours. It orientates itself with a system of cameras and ultrasound sensors capable of avoiding obstacles, and features a GPS and a radar to self-guide through the streets until its arrival to the delivery point. Should any issue occur, it is also human-monitored from a control station.

Regarding the user, order tracking appears to be extremely easy. Details can be browsed through a simple Smartphone App and, when the robot arrives to the customer´s home, a security code introduced in the very same App will allow the opening of a lid so that the order can be collected. Afterwards, the robot returns to its source point in order to pick up a new order. So far, the service reaches customers within a range of 3 to 5 kilometres / 1.86 to 3.10 miles and the company estimates a delivery time between 15 to 30 minutes. Besides, they claim that this automated courier is able to carry a weight of up to 20 kg / 44.1 lb.

As always, pros and cons come together

This experience, along with some other attempts by Amazon, are examples of how digital transformation is reaching even the most quotidian processes of our everyday life. The company responsible for these couriers of the future claims that these pilot tests have been a complete success, thus entailing a promising service development.

In fact, there are plenty of advantages for the final user and for the company, as it would imply a more affordable service and faster delivery time. Nevertheless, there are still some concerns about how the robot will solve potential issues along the way, such as insurmountable steps, treacherous bumps and especially, robbery and unit abduction.

Currently, this service is available in some cities in Germany, England and Switzerland and could be also implemented in more European countries. Who knows whether a machine will be soon the one at your front door expecting a tip after delivering your groceries or Menu of the Day.