In 2018, Costa Rica broke its record of green power production. For 300 consecutive days, the country ran entirely on renewable electricity. Iceland, in turn, aided by its abundant geothermal power supply, uses renewable electricity almost all year round, while Norway closely follows it thanks to its extensive wind farms. Year after year, there is sustained growth of renewable energy all over the world and, besides improving the efficiency of established technologies such as photovoltaic power, other green power sources are also being explored. The latest news in the field of tidal power suggests that the future of green energy could be found in the seas.

Back in 2018, the company in charge of the tidal wave station of Orkney, in the Scottish coast, announced that it had produced 3GWh worth of electricity over the previous twelve months, thus breaking all the tidal power generation records in Scotland. The SR2000 model developed by Orbital Marine Power uses a set of turbines that hang from a floating platform and spin with the tides. Furthermore, this year, the largest tidal power turbine in the world, in this case on the seabed, will also start operating in the Scottish coasts. With a total weight of 150 tons, it will boast twenty-meter long blades, and it will be set on the seabed. This technology has been introduced as part of Project Stroma, first established in 2010. The expected output of the whole station is expected to reach up to 400MW, which would make it the most potent electricity plant of its kind in the world.

So, which are the current options in terms of renewable ocean energy? Here are some of the most important ones. By the way, you can also check out the cool video we prepared recently about the renewable energies of the future.

As already pointed out, tides are probably the most promising source of renewable energy from the oceans. Their most significant advantage is that, as long as the Moon keeps orbiting the Earth and gravity maintains its pull, they will continue generating electricity reliably and regularly. The most popular tidal power systems work a bit like aerogenerators: they use underwater turbines that are moved by the flow of the tides. This type of tidal power stations is known as Tidal Stream Generators (TSG). Another, and more expensive, option of renewable ocean energy, would be the tidal barrages, which instead of damming water, they allow the high and low tides to flow through their turbines. 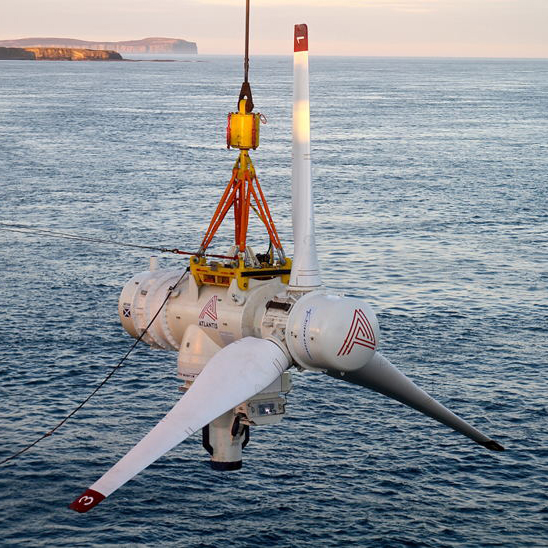 Although the first technology projects to harness the kinetic energy of the waves can be traced back to the late 19th century, the first commercial power stations would not become operative until the last decades of the 20th century, in Norway and the Scottish coast. Even though the latter, the Islay LIMPET, was decommissioned in 2012, other renewable ocean energy plants took over. A similar one was opened in the Bay of Biscay, along the Spanish Cantabrian coast, in 2011. Currently, there are more than a hundred experimental power stations around the world that harness wave power. Unlike wind and photovoltaic power, there is a wide range of wave power technologies. These are some of the most common wave energy converters (WECs):

Indeed, some of these renewable energy technologies could provide a stable and efficient source of clean power in the future, enabling the transition to a more sustainable energy model.