In 1883, the violent eruption of the Krakatoa volcano in Indonesia generated the most deafening sound ever recorded: it reached 310 dB, and an explosion equivalent to that of a cannon shot was heard three thousand miles away. The sonic wave was so powerful that it even affected the waves in England. Today numerous technological and scientific breakthroughs harness the potential of sound more benignly, with applications in medicine, cleaning, or underwater echolocation. To these, we can now add 3D printing with sonic waves.

As pointed out by the developers of the new 3D printing technique, whose results have been published in the journal Nature, ultrasound had so far been used in destructive applications such as the removal of tumor tissue. Could it be possible to use it for creative purposes? The short answer is yes, as seen in the samples in the adjacent image. As always, the devil is in the details. 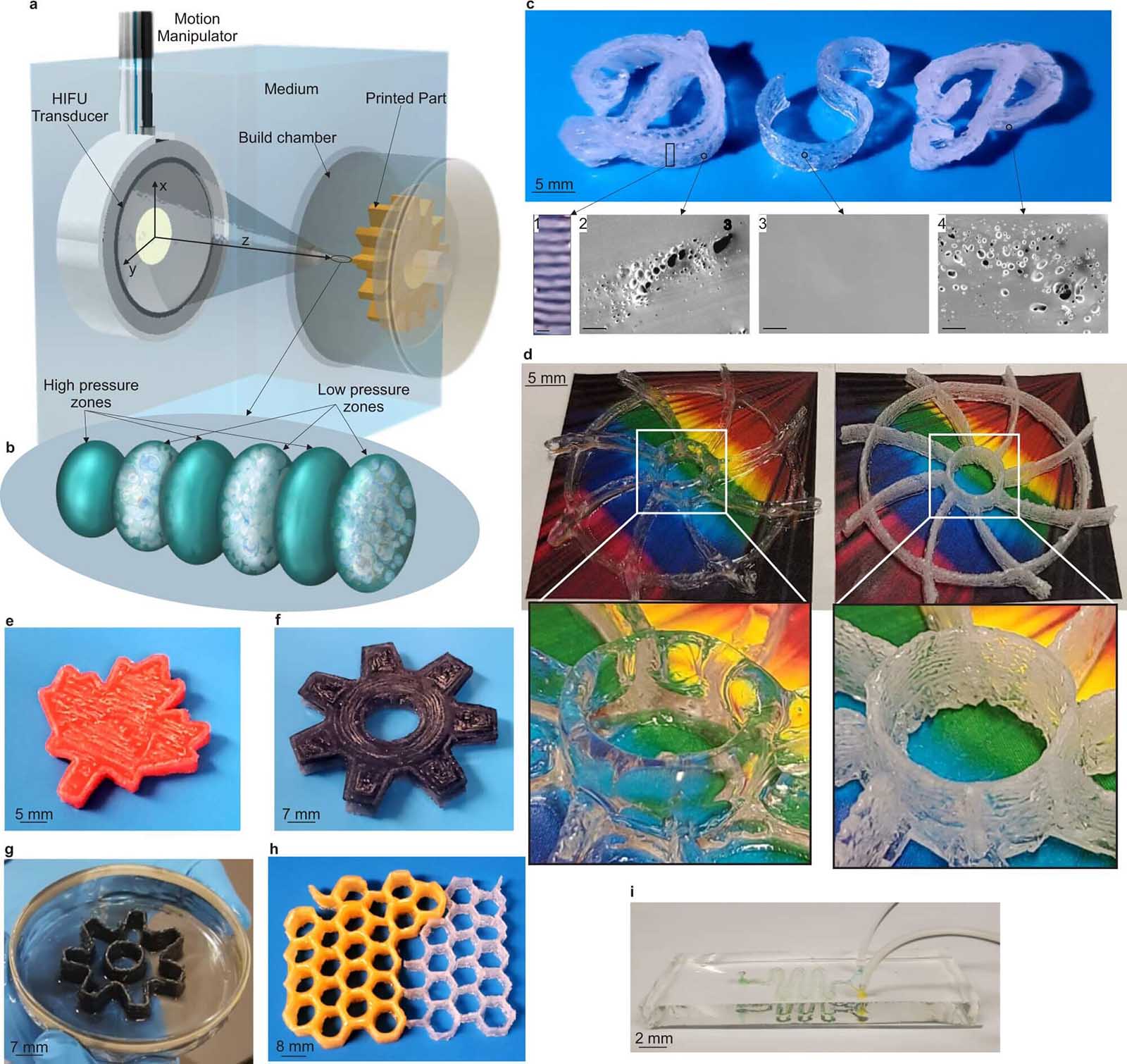 There have been two main 3D printing techniques: the first and most common is by melting polymers or other materials with heat. The other, and less common, is utilizing light radiation, which solidifies liquid resins through laser beams. The third option is 3D printing with waves or direct sound (DSP). Moreover, with unprecedented precision, allowing the creation of highly complex structures.

The approach used by researchers at Concordia University in Canada involves using ultrasound at a specific wavelength to generate chemically reactive zones in a liquid polymer solution. The sonic waves produce extreme pressure changes in microscopic air bubbles whose temperature rises to about fifteen thousand degrees kelvin for a few picoseconds.

The raw material used is a PDMS polymer commonly used in additive printing. However, thanks to the ultrasonic field, which can be modulated depending on the liquid's viscosity and the wavelength type, the 3D printing process can be carried out point by point, as if they were pixels in an image.

The technology, with applications in the aeronautics industry, in the manufacture of sensors or even in the printing of implants inside the human body, has already been tested with polymers and ceramic materials. The next step will be to work with polymer-metal composites to achieve 3D printing with waves in metals ultimately.

A generational leap in 3D printing with light and nanomaterials

As already mentioned, 3D printing with light and resins is a somewhat less common technique than thermal additive printing. However, substantial progress is also being made in this field. Researchers at Stanford University have resorted to a blue laser beam that solidifies a gel-like resin.

However, that is not all. Under normal conditions, the resin solidifies along the entire laser beam. An additional strategy is needed to enable selective solidification (or curing, as it is technically known). Scientists have achieved this by means of nanomaterials spread across the resin and a red laser beam.

These nanomaterials are droplets of tiny size – one-thousandth of a human hair – and a protective silica coating. According to the scientists, achieving this coating to keep the liquid inside from leaking was one of the great challenges of the project.

When the red laser beam encounters these nanomaterials, the low-energy red photons are converted into high-energy blue photons. And it is at that moment that the resin solidifies, thus achieving the so-called volumetric printing.

This technique is currently relatively slow, but its developers hope to be able to print multiple dots simultaneously to speed up the process and improve the print resolution.

The nanocapsules developed in this project could also be used in solar panels to convert low-intensity light energy into usable wavelengths for photovoltaic cells.

If you want to learn more about the applications of 3D printing, check out this article on its use in biomedicine or its growing popularity in the construction sector with new biomaterials.

Whether through wave 3D printing or by resorting to new metal alloys such as the one mentioned in this article, it is possible that 3D printing will finally reach large-scale industrial applications soon.