Anthropogenic global warming has slowly abandoned the kingdom of the merely theoretical to inhabit the realm of harsh reality. Even countries like China, traditionally guided by policies advocating industrialization at any cost, are making huge investments in renewable energy. In 2015, emissions of carbon dioxide decreased for the first time in a context of economic growth. So what’s all the fuss about? Transforming the power generation model will bring down emissions to sustainable levels, but this will take many years. There are some that have suggested that we could launch thousands of rockets into the atmosphere to simulate a volcanic eruption, thus preventing solar rays from reaching the Earth. Another option would be placing a network of gigantic mirrors in orbit to deflect solar rays. Disposing of carbon dioxide, however, could prove to be a more down to earth approach.
A recent paper published in Science magazine has laid on the table a radically new technology. The long name would be “carbon dioxide sequestration by direct mineral carbonation”. Essentially, this involves transforming CO2 into limestone.

CO2 rocks, the mineral that could revert global warming

A team of researchers from the USA, Iceland and France has proved that pumping the gas deep into underground basalt rock triggers a chemical process that turns it into calcite. The technique involves diluting CO2 in water and hydrogen sulfide, a combination that reacts with the volcanic minerals below and creates the harmless calcium carbonate. 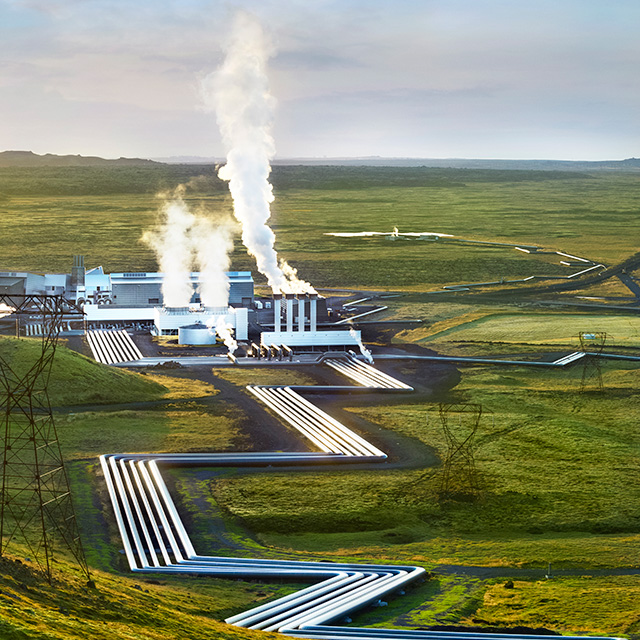 Up until now, the mineralization process advocated by the team of geoengineers was believed to require hundreds, even thousands, of years. However, Juerg Matter, the main author of the paper, announced that it is possible to complete the process in less than two years, achieving a 95%-98% efficiency.

The first tests began in 2009 with the injection of gases into layers of basalt rock between 130 and 260 feet below the surface. The testbed chosen for the Carbfix project was the Hellisheidi geothermal power station in Iceland – the largest of its kind in the world. Geothermal energy is as clean as it gets, but pumping water underground liberates CO2 and sulfide gases as by-products that need to be dealt with. Shortly after beginning the experiment, the scientists found that the carbon dioxide had turned into a white chalky mineral.
In 2012, the team at Hellisheidi started pumping carbon dioxide underground on an industrial scale: 5,000 tons annually. This is still a small proportion of the 40,000 tons emitted by the power station every year. However, this year that amount will be doubled as the engineers have found that the process remains stable in spite of the increase. This opens the door to a large scale application around the world.

“Is possible to complete the process in 2 years, achieving a 95-98% efficiency”

The technique developed by Matter and his team differs from other underground carbon dioxide sequestration systems that take advantage of the underground cavities left by depleted gas or oil fields. These other options pose long term issues, as the injected gas can be released during earthquakes or leak through cracks. Mineral carbonation, on the other hand, transforms carbon dioxide into a risk-free solid material. Moreover, the cost per ton of neutralized CO2 has been estimated to be less than half than other sequestration and storage techniques.