The challenge of obtaining fresh water for human consumption is, undeniably, one of the most pressing issues of the 21st century. Global warming and desertification, together with the pollution of rivers and water reservoirs, have severely affected the availability of drinking water. Desalination of sea water, especially in the Middle East, is one of the most common techniques used to tackle this problem. Unfortunately, desalination of sea water is a power-hungry process, one that tends to use fossil fuels. At an early stage, around the mid-twentieth century, the results were achieved by water evaporation. However, the process was costly and slow, a fact that led to the search for new, improved technology. The next great step would be reverse osmosis, which would pave the way for the latest desalination technology: capacitive deionization (CDI).

With a 60% uptake among desalination plants, reverse osmosis is by far the most widespread technology. We already dealt with reverse osmosis on one of our previous articles about blue energy, but here’s a quick reminder of the process. Reverse osmosis, as explained in this infographic, is based on a set of membranes that separate two water solvents. One is saline water, while the other is fresh water. Usually, liquids tend to a solvent equilibrium, with the less saline water flowing to the most saline water compartment. However, when pressure is applied on the saline water, it will flow towards the fresh water and the semi-permeable membranes will filter the salt particles. This system, however, is quite energy-intensive. 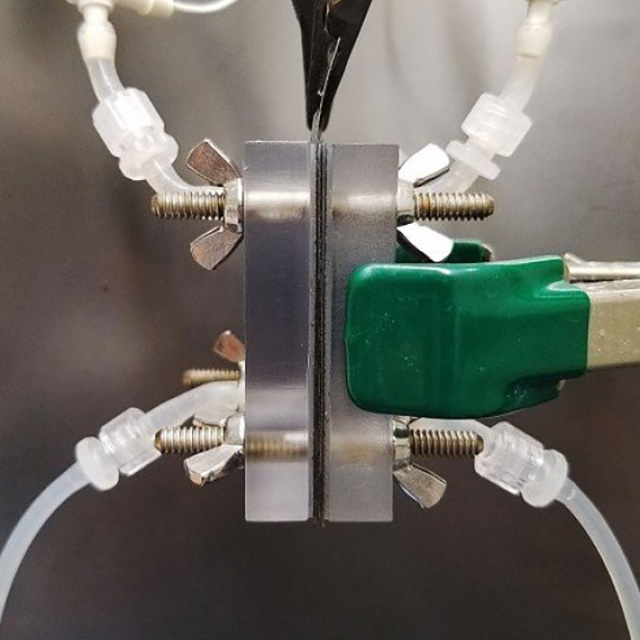 Towards a new generation of desalination plants

Enter capacitive deionization, a new system still under development which, besides filtering salt from water, can also store energy. How does it work? Well, just to give a rough idea, it makes use of a set of electrodes (cathodes and anodes) that attract salt ions when an electric current flows through them. Then, at the regeneration stage, and by means of an inverted current or zero voltage, the ions are released and generate electricity. The main hurdle still to be overcome is the development of the required electrochemical condensers, as this second stage can cause the electrodes to rust heavily. It is also the case that the system can at present remove only small concentrations of salt, since anything going above 1.2 v dramatically increases the corrosion of the electrodes as they release the ions. There are several labs working on this promising water desalination technology; in theory, it should require between five and six times less energy than reverse osmosis.

One of the latest advances in this field has been made by a team of researchers at the University of Pennsylvania; they have created a water desalination process called battery electrode deionization (BDI) system. Their technology is based on a cell with two electrodes at each end, and two channels separated by a membrane. The scientists circulated two solvents —one saline and the other with fresh water— applying a constant current. The first advantage is that the same results as before can be achieved with half the voltage (0.6 v). Secondly, by just reverting the cell voltage flow (+0.6 v or -0.6 v) and creating a simultaneous production of desalinated and concentrated water in two channels, it also circumvented the two-cycle approach and the challenging regeneration stage. Finally, they discovered that, by stacking additional membranes, they could reduce energy consumption even further.

The technology is currently suitable for low-concentration salt water only, although the development team is confident about future applications, once the technology is somewhat more mature.