The storage of renewable energy is one of the great challenges for wind and solar energy to become the leading source of electricity. While nowadays they offer an efficiency that was unthinkable a few years ago – in the case of photovoltaics they already exceed 20% – night-time or windless periods continue to affect the stability of production. Fortunately, a unique semi-solid battery developed by MIT researchers could be one of the scientific breakthroughs that could provide an answer to this challenge.

In this article, in addition to addressing the innovative MIT battery, we will cover other renewable energy storage solutions such as these:

Technically, the MIT device is a semi-solid flow battery, but its consistency and color are reminiscent of molasses. The researchers recently published a paper in the scientific journal Joule demonstrating that their solution could be cheaper, more efficient, and scalable than current ones.

These new batteries aim to store electricity from so-called variable renewable energies (VRE) for a day or more. In this case, the main ingredient that scientists have used to achieve this is zinc-manganese oxide.

One of the main obstacles for flow batteries, such as vanadium batteries, is the high cost of the chemicals used to store electricity on a megawatt scale. To get around this hurdle, the researchers resorted to mixing manganese with carbon black, which gives it the molasses-like appearance described above. This mixture, in turn, reacts with a conductive zinc solution.

Thanks to their viscosity, these electrolytes (as the solution is known) can flow but at the same time the electroconductive particles are prevented from precipitating to the bottom when not in use. Crucially, the researchers point out, they have struck a balance between cost, performance, and durability right from the prototyping phase.

The zinc-manganese battery is an evolution of the flow batteries that have been developed over the last decades, which offer high charging and storage capacity in a very short time. Below, we explain this and other renewable energy storage techniques.

Flow batteries began to be investigated in the 19th century when they were used in a prototype airship called La France that could fly for eight minutes with a half-ton zinc-chlorine flow battery developed for the project. This battery was of the liquid type but never got beyond the experimental stage.

NASA revived the idea a century later, in 1973 when it produced the first redox flow battery, intended for a future electrically powered lunar base. Unfortunately, it was never used. Finally, in the 1990s, vanadium redox flow batteries began to be used industrially at a Mitsubishi power plant in Japan. This time, based on iron and chromium.

These batteries usually have a high production cost, but curiously, the pitch used as fuel was very rich in this metal. As well as the soot it generated, which would allow them to be produced competitively.

But what is the redox system? These flow batteries for renewable energy storage are based on liquid electrolytes and a process of reduction and oxidation (hence “redox”).

The electrochemical process is based on two components dissolving in a liquid solution that is passed through adjacent membranes where ion exchange takes place. In the case of vanadium, different oxidation and reduction states are applied to each side so that the elements exchange protons to achieve equilibrium. 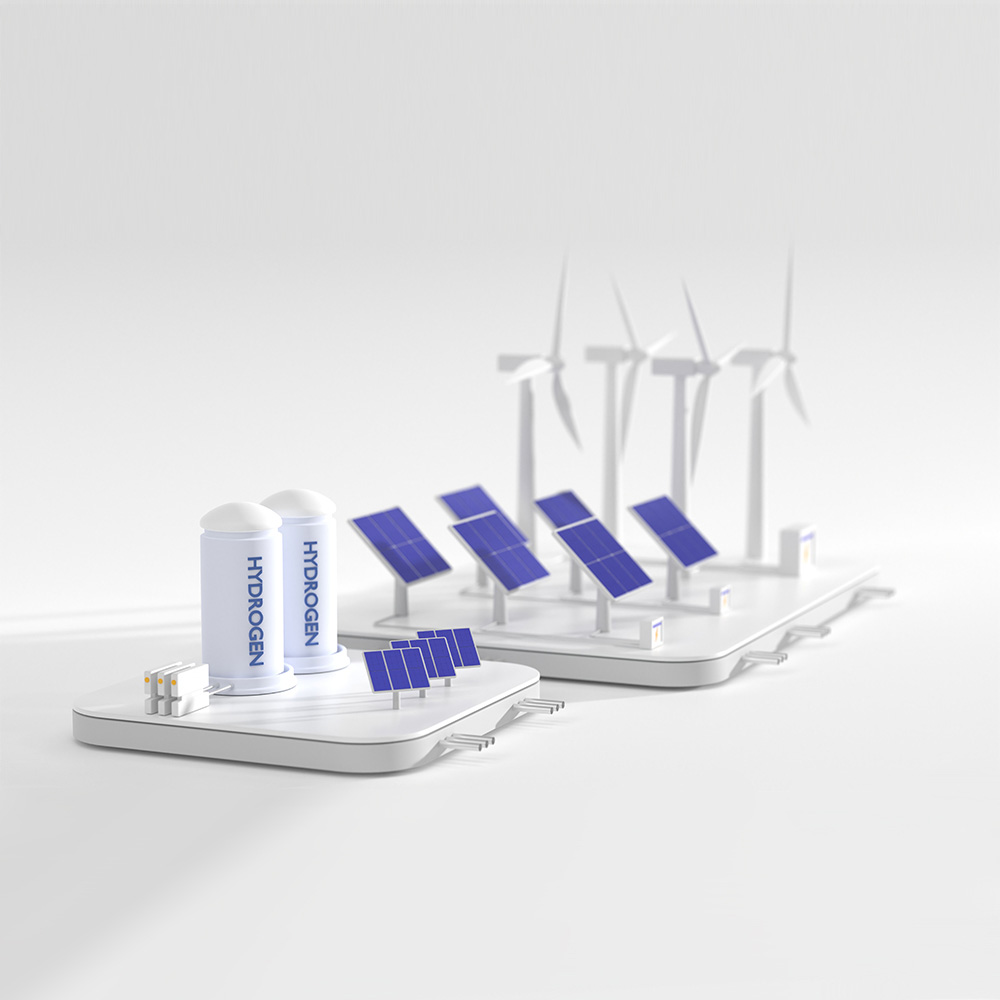 In addition to replacing vanadium with bromide to reduce costs, other redox batteries that have been developed in recent years are based on organic materials, which would close the ecological circle of renewable energies.

Another way to store renewable energy is to convert it into fuel. Specifically, we are talking about green hydrogen. Because electrolysis processes generate hydrogen, it is possible to use renewable energy to extract it from water, as is being done in this project.

This solution is one of the most promising. Countries such as Spain and the USA are betting on green hydrogen as one of the solutions to give stability to the renewable energy supply. It is estimated that, by 2040 or maybe even earlier, the cost of green hydrogen will be the same as that of producing gray or blue hydrogen (including carbon capture), i.e., hydrogen generated by fossil fuels.

Gravity is one of the ways to generate electricity. It is what allows hydroelectric dams to operate. The pumped-storage hydroelectricity (PSH) approach involves reversing this process. That is, using renewable energy to pump water to higher reservoirs when electricity is surplus and passing it through an electric turbine during periods when it is needed.

There are several approaches to this type of renewable energy storage. Either a natural reservoir or an artificial reservoir can be used. Seawater or even subway or underwater reservoirs can also be used. In any case, a combination of pumping systems and electric turbines is required.

A compressed air renewable energy storage plant exists in Ontario, Canada. The facility is capable of producing 1.75 MW/hour for six hours. The goal is to achieve up to eight hours of uninterrupted supply, and there are already plans for two more plants.

The operation of this technology is relatively simple. During peak renewable energy production hours, electricity is used to compress and pump air into subway cavities, either artificial or natural. When the energy is required, the air is released through a system of valves to drive electric turbines. The advantage of this technology is that it does not require lithium or chemicals like conventional battery systems.

While compressed air stores energy utilizing pressure, molten salt systems do so through heat. The operation of this technology is somewhat different from the previous ones. In this case, a solar thermal power plant is used. A solar concentrator is used to heat a combination of various salts, which may include sodium, potassium, calcium, and others. The molten salts are stored in tanks for later use.

When this energy needs to be released, the waste heat from the salts is used to generate steam, which in turn drives an electric turbine. With proper insulation, heat can be retained for an entire week, making it a technology with considerable potential. The first molten salt energy storage projects were carried out in the late 1990s.

If you want to learn more about alternative renewable energies in addition to renewable energy storage, we recommend this article. Here’s a hint: the key may lie in the seas.