Using the strength of your rivals against them is a revered mantra in martial arts. And, in a way, it is the underlying philosophy of a group of researchers at the MIT in the USA that has just presented their latest innovative material. As the culprit of global warming, carbon dioxide is usually demonized, but in this case, it is a key component in the development of a new material extremely resistant to tear and wear. The polymer synthesized by the American researchers draws its inspiration from plants, which use carbon dioxide as a reactive in their photosynthetic processes.

We have already addressed self-repairing and smart materials in the past. Some of them use spores and bacteria as healing agents, while others are based on a network of nanotubes that release a sealing agent when the material cracks. We have also explored the mineral carbonation of carbon dioxide. Now, the new MIT-developed technology combines both approaches in an efficient and pioneering way. 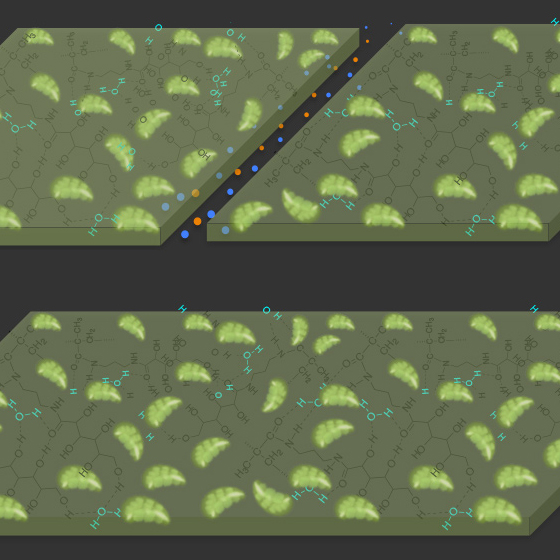 The material that they are working on reacts to the carbon dioxide in the atmosphere and starts to grow, strengthen and even repair itself, just like a plant would do. Basically, it is a gel-like synthetic polymer with chloroplasts, one of the biological compounds that allow vegetal cells to capture sunlight. The only issue is that this compound is extremely unstable and starts to degrade after a few hours. However, in their innovative technological project, the researchers explore several ways of expanding its lifetime, and even replacing it with a synthetic version in the future. Besides the chloroplasts, the gel is based on aminopropyl methacrylamide and glucose, together with an enzyme called glucose oxidase.

Many of the self-repairing materials researched in the past had to be activated through several techniques, such as ultraviolet radiation or pressure. The new gel, however, just requires light and carbon dioxide to work.

According to the scientists behind the project, this would be the first time that a carbon-dioxide synthesizing technology is implemented in a construction material. Of course, besides its self-repairing properties, the new material could help to reduce the amount of carbon dioxide in the atmosphere. It also has another eco-friendly credential, as no fossil fuels are required to produce it.

The future is now

This gel, which solidifies in the presence of air and light, currently lacks the strength to replace cement or concrete. Nevertheless, this self-repairing material could be used as a coating material, both for façades and indoors, to improve the durability of buildings. It could also be applied as a crack-repairing solution. The good news is that this is not a far-future technology: it is a commercially viable product, as the MIT team has already developed techniques to produce it by the ton.